The Vice is the most secure ball trapped chastity device of the moment. It is not easy to stay locked when you have no keyholder.
Locked in Lust now has the perfect solution for the problem. Buy your new chastity device with the keyholder service. They will send the key separate from the lock.
When the device arrives you lock yourself and after that you have to wait everyday near the door till the postman arrives as a good little puppy.
Will your key be in the mail today? 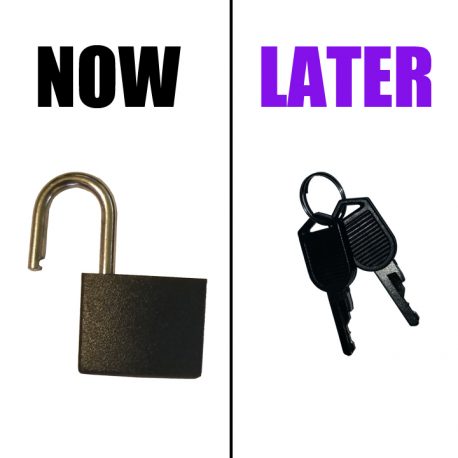 The Online-Chastity Mistress is a lifeline for desperate and lonely chastity subs.

Stumbling across Online-Chastity Mistress has been such an amazing surprise. I really thought I had seen all the web had to offer of chastity and keyholder sites. Each one just leaving me feeling more lonely and longing for a goddess to take control in my life.

I initially thought that this might be a website that was controlled by software, without a human element. Was I ever wrong!

The Online-Chastity Mistress will shake you out of the cocoon of your mundane routine, and start to accentuate the sensual periphery of your existence!

I took a chance and sent off an email to request an online chastity experience. Almost immediately I received a reply. The Online-Chastity Mistress was personable, straight forward, and demanding.

If you have a hard time following directions, prepare to suffer the consequences! Online-Chastity Mistress demands a high level of attention to detail, and devotion.

After revealing a bit about my desires and situation, I was given clear instructions on expected behaviour. The Online-Chastity Mistress has ways of testing your ability to follow rules. she just seems to know what is going on in our grovelling submissive brains.

to a challenge that was a bit of a gamble – guessing how many clothespins she wanted me to decorate myself with for either reward or punishment (I got lucky, I guessed correctly!). The clothespins were a challenge that had to be fit in to the normal activities of the day… So What if you have to go to work, or have dinner with the in-laws, better find a time and way to get those clothespins on!

The anticipation of not knowing what the next day held regarding the Mistress’s demands was delicious torment! I would awake so early every morning to check for her email describing her level of satisfaction with my previous performance and detailing the next day’s challenge or task to be completed.

Although the expectations were challenging, they did have the positive side effect of improving quality of life. When made to clean house in my newly purchased panties chastity cage,

not only was I a bit humiliated, but my house was sparkling clean!

Online-Chastity Mistress will keep you locked and dripping

The two weeks spent corresponding with this talented Mistress has left me in a heightened state of arousal and awareness. As much as I tried to control my impulses, I did suffer an indiscretion near the end that she almost immediately found out about and made me pay dearly in blood!

A small sacrifice for the privilege of continuing to be a devoted chastity sub to this wonderful Mistress!

Not only was my appreciation and devotion to the Mistress elevated, but devotion to all Women was demanded. Interacting with women on a daily basis with the feeling of being plugged and caged under my clothes was both humbling and highly arousing!

I look forward to bowing down before Online-Chastity Mistress for many more weeks to come of torment, arousal, and improvement!

This morning was interesting. I slept in my panties which of course had me struggling to get hard all night. I got my small plug and lube beside the bed ready to this morning. I slowly took my time playing with it on my ass. As I relaxed more and more It went a little deeper. Eventually I was so horny for anything I pushed myself all the way on it. It is bigger than my toy. When the large part just passed through my checks clenched pulling it in so deep it drove me crazy. It felt so good and I felt so full . My cock so tried to get hard and this cage tighten and it really pulls on you balls, I was getting my frustrated and filled with desire to come by the second. I kept applying lube until it really started sliding in and out, I kept this going slowly for while. It was confusing wanting to get an erection and stroke but can’t but this was feeling so good. I was losing it.

It started to feel like I was going to pee or cum, I wasn’t sure. After a while I was well relaxed, the plug was sliding easily and I covered in lube I set my timer on my phone for the final one minute. I wanted to come so bad I thought I may, I fuck myself real fast as I was losing mind in pleasure and frustration. When the time went off I scream and wanted to cry. I was feeling so good and somehow I thought I would come. I didn’t realize but I was spilling a little but because of my foreskin it stayed inside. I didn’t realize until I stood up to go wash up I notice come slide out on the cloth. I tried grabbing my camera and getting it but it absorb into it and I only got it on the towel as it was drying. I have never been so blue balled on in my life. I want to get hard and feel my cock so bad. This is crazy.

You really put over the edge this morning with that Mistress. Tuesday can’t get here fast enough, lets hope I can get a reason good enough for release before I get locked back up again. This training set should get interesting.

Well this was my first time in chastity. After a long time of wanting it and not sure how to go about it, I order a device for myself. Only to learn later it wasn’t one of the better ones on the market but will do the trick. After some searching around and not being able to find a key holder I came across Online Chastity and decided to give this a try. After signing up for a 7 day locking, I wasn’t sure how long I should try as they do have various agreements depending on what you are looking for, I received a response with directions to when and how start my locking period. I was nervous and excited balled into one. The week was fun, frustrating and exciting. I couldn’t believe how Online Chastity was gaining control over me and the mind games they were playing. It has completely changed me. The experience I got from Online Chastity went above and beyond my expectations. Needless to say I have ordered a better device, a Bon4 which they sell on their site. The day it arrives in the mail I will be emailing Online Chastity Mistress for a longer term. I plan on using this site often in the coming future. So guys if you don’t have a key holder, email them now. You won’t be disappointed but you will be frustrated..haha!